Tokiwazu is a “narrative music” descended from “Joruri” that had developed along with Kabuki. For Tokiwazu, music with a story is performed with rhythm, which is said to be “narrated” not to be “sung” or “chanted”.

This Ukiyo-e depicts a performance of “Sanzeso Nishikibunsho” that is commonly known as “Sanzeso”. At the climax scene of a sword fight at the “Sanja Matsuri” festival, Tokiwazu Tayu (narrators) in Kamishimo (ceremonial costume worn by samurai) and Shamisen players aligning upstage are increasingly livening up the play. Meanwhile, “Sanzeso” is performed as Tokiwazu alone independently. Just by listening to the Tokiwazu narration, audience can enjoy the world that is something different from the Kabuki play.

Tokiwazu Tokizo (administrative director) says that Tokiwazu is meant “to be enjoyed not only for its musically good voice and sound”. Tokiwazu, being a narrative music, can take both the performers themselves and the audience into an imaginary world. Please have an experience of the world of Tokiwazu so that you can rediscover the pleasure and joy of listening.

This is a picture of SUGOROKU (traditional Japanese board game played with dice) based on Tokiwazu music numbers that were created in the Edo period. It includes popular numbers such as “Genda”, “Kuzu-no-Ha”, and “Umegawa”, which are still today performed. The goal is set at “Seki-no-To” (Tsumoru-Koi-Yuki-no-Seki-no-To). It is said that there are as many as several hundreds of Tokiwazu numbers, which have been passed down by many fans till today.

Tokiwazu style was founded in 1747 (Enkyo 4) in the middle of the Edo period. The founder is Tokiwazu Moji-tayu I who was a disciple of Miyakoji Bungonojo, the founder of Bungobushi. Performance of Moji-tayu on the Kabuki stage that was his profession gained a great reputation and taking Tokiwazu lessons became a fad among ordinary town people.

Also after the Meiji Period, many great performers have continued to appear and performance & narrative music of Tokiwazu have been passed down till today. This is a Nishiki-e (colored woodblock print) published in 1885 (Meiji 18) that depicts the 250th anniversary of the founder Tokiwazu. It was a glorious event where persons concerned with Tokiwazu at that time led by Tokiwazu Komoji-dayu VII (later known as Rinchu I) paraded the street to the Denboin Temple accompanied by Kabuki actors and men and women of all ages, holding parasols on which the Square Mokko-Mon (Tokiwazu family’s crest) was printed.

About the Kansai Tokiwazu Association 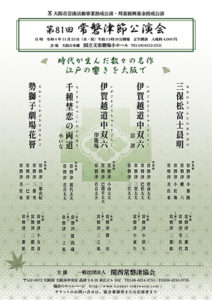 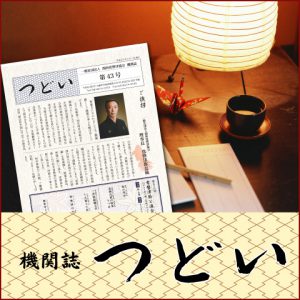 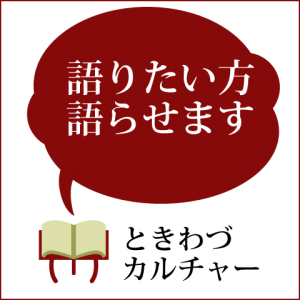